Enter your email address and we will send you a registration email.

(If you do not have an account we will email any questionnaire results to you.)

Thanks for registering with us!

Check your inbox for an email containing instructions on how to complete your registration. If this doesn't arrive straight away, please check again later and it may be worth checking your spam folder.

Thanks for completing this questionnaire!

You should receive an email soon containing your results and information on how to complete your registration, should you wish to do so.

Enter your email address below and we will send you a reset password link.

Want to Own This Painting & Support Moyo the Baby Elephant?

For the past 12 months my girlfriend has been bombarding me with the most delightful video clips and photos of Moyo the baby elephant. Moyo was born prematurely. He was found abandoned. An organisation called Wild Is Life adopted Moyo. As a result of this adoption, Zimbabwe Elephant Nuresry (ZEN) was born. ZEN is part of Wild Is Life. Wild Is Life was established 18 years ago. It was founded in order to look after injured, orphaned and endangered wildlife. Moyo was the first elephant that Wild Is Life adopted. For quite some time Moyo was the only elephant at the sanctuary. Since there were no other elephants, Moyo’s friends were a resident Warthog named pickles, a dog named Josephine and a sheep named Kim. It has been wonderful to watch Moyo’s antics and see the immense love Moyo’s carers have for him. Above, you will see a painting of Moyo. This portrait has been painted by wildlife artist Leigh Banks (who also doubles up as my girlfriend in her spare time!). Leigh is selling the painting of Moyo. 25% of the proceeds will be donated to Zimbabwe Elephant Nursery. If you would like to buy this wonderful painting of Moyo, CLICK HERE to contact Leigh. (Dimensions 1m x 50cm)

Moyo and ZEN are being featured on BBC 1 documentary: Sunday 5.35

Moyo and ZEN are being featured on a BBC 1 documentary, Nature's Little Miracles on Sunday night. So do watch them if you would like to see Moyo and his new elephant friends. In the meantime, here is a delightful little clip of Moyo. It also includes his friend Pickles the Warthog, Jessica the dog (together on their daily walk) and some of the other animals at Wild Is Life.

Elepahants Will Be Extinct in 20 Years

The terrifying reality is that in 20 years time we may have no elephants left. An elephant is illegally poached every 15 minutes. And there are currently less than half a million elephants alive. The poaching is driven by the ivory trade. There is a growing middle class in China and South East Asia who consider ivory to be an investment. Ivory carvings are considered a symbol of status and success.

Zimbabwe Elephant Nursery has been established in order to adopt and raise orphaned elephants. This is a pioneer project in Zimbabwe. When the elephant calves have reached 4-5 years old, they will be moved to a protected wildlife area. They will then be integrated into the protected reserve. ZEN seeks to raise awareness about elephants in Africa. It also hopes to educate young people about elephants.

We at Live Life Satisfied want to support the Zimbabwe Elephant Nursery. We’d like to encourage you to keep up to date with Moyo’s development at ZEN. Watching video updates and seeing pictures of Moyo and his antics has moved me to the core. Sign up to the Wild Is Life Facebook page (click ‘like’) and you too can keep up to date with the wonderful work of Roxy and her team at Zimbabwe Elephant Nursery. CLICK HERE to be taken to the Wild Is Life Facebook page. If you would like to buy the wonderful painting of Moyo (seen above) CLICK HERE to contact Leigh. (Dimensions 1m x 50cm) 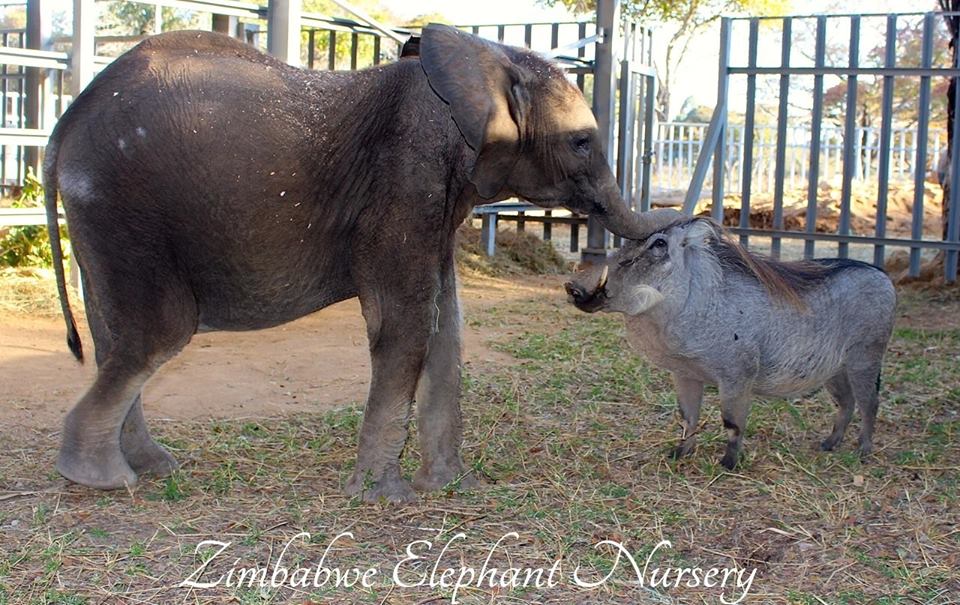 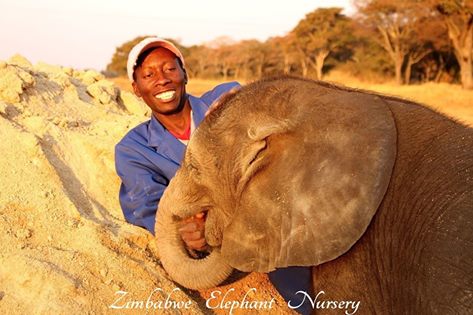 Paradzai Mutize, Elephant Foreman at Zimbabwe Elephant Nursery. "Paradzai leads a team of exceptional men, who provide 'round the clock' care, respect and dignity for our little group of elephants." Roxy, ZEN Founder.

The Secret to Improving Lives & Building a Better World

What Can We Learn From Chimpanzees?

Want to Own This Painting & Support Moyo the Baby Elephant?

"The Live Life Satisfied web site is a new way to access information to help improve your lifestyle choices. It is designed to be simple to use with interactive elements to engage users."
- Dr Carolyn Mair, CPsychol., Course Leader MSc Applied Psychology in Fashion and MA Psychology for Fashion Professionals.

"I am delighted to have come across your website - you have written lots of things that I wish someone had told me before. I will read many times what you write until it 'sinks in'. It has given me a new perspective."
- Elmem, Live Life Satisfied user

"Phil Warren celebrates the differences that make us who we are ...his website is an invaluable resource for anyone trying to live life satisfied – which is, surely, all of us."
- Michael Aylwin, Sports Correspondent, The Guardian/Observer

"I can't believe how I relate to what you are describing. I thought I was a lost cause and knowing that there is a reason for my behavior, I feel more hopeful. …Thank you for making me feel not entirely crazy!!"
- Courtney, Live Life Satisfied user, New York, USA

"I found your website, and it is brilliant.  It speaks to a lot of areas in my life and in my relationships that I have been working on."
- Pheonia, Live Life Satisfied user, Canada

"I just stumbled across your website. All I can say is AMAZING man. I have been suffering from depression and anxiety for 3-5 years. As a gay male I haven't been able to find any text that I have understood, and believed in every piece of text on your site."
- Brad, Live Life Satisfied user, Queensland, Australia

"I have many chronic illnesses and have not felt depressed but I am realizing that I still have so much of the symptomology that I need help.  Thanks - I'm going to try to use your site as a guide."
- Gretchen, Live Life Satisfied user

"I am a Ugandan gentleman the founder of [youth company] for raising standards and improving lives of young people in my village. Sir due to your information we are benefiting with you. Please I and my fellow youth in the NGO thank you very much. "
- Kaabu du, Live Life Satisfied user, Uganda

"Hoarding is one of our (my) issues and so I ended up on your website which I found really useful!"
- Michele, Live Life Satisfied user

"The content/info was just what i was looking for as an anxiously attached truth teller with poor impulse control! …It has def offered insight to my ongoing relationship problems. Thankyou"
- Tania, Live Life Satisfied user, Australia

"The concepts on your site have been so fresh! Insightful. Hopeful. Gaining these insights into the way I operate has been very helpful and knowing I can change them is exciting. Thank you."
- Ann, Live Life Satisfied user, New York, USA

"Just to say that I came across this website when trying to formulate a plan to support a young probationer with impulse control,I found it really helpful and will use it myself as well."
- Arlene, Live Life Satisfied user, Scotland

"I now realise that I have been burdened by unrealistic life goals. I know that this is something that I will have to continue to work on for some time but I now have the confidence and knowledge to turn my life around."
- Suzanne, Live Life Satisfied user

"I found your site tonight and have really enjoyed reading lots of pages. I think you write about psychology in an easy, accessible format."
- Natalie, Live Life Satisfied user, UK

"I just wanted to write and thank you for your very sane approach to depression I haven’t been able to talk to anyone about this and get any help at all. I am 56. Thank you for pointing the way."
- Anne, Live Life Satisfied user

"What you have said about hoarding makes so much sense. I have things around in boxes in various cupboards and drawers that are 30+ years old. You are the only person I have told. I feel you have given me permission to take it one very small step at a time."
- Maureen, Live Life Satisfied user, UK